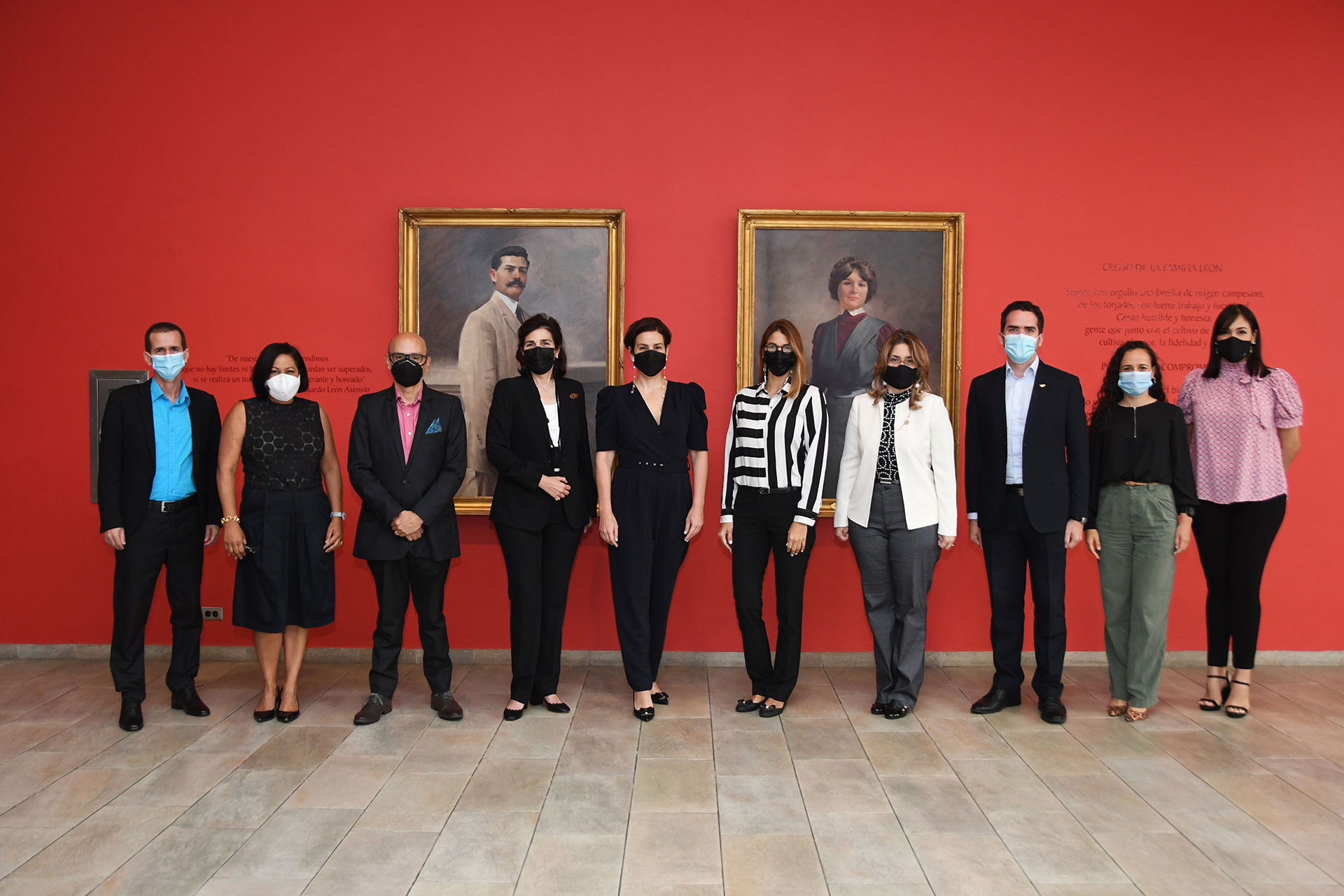 • The agreement will allow the airports managed by AERODOM to have art exhibitions or temporary cultural facilities that highlight the country’s image organized by the León Center.

Santo Domingo, RD- The Eduardo León Jimenes Foundation, the Centro León and Aeropuertos Dominicanos Siglo XXI (AERODOM), a subsidiary of VINCI Airports, signed a collaboration agreement to jointly develop activities to promote Dominican culture and art in the airports operated by AERODOM, with the aim of strengthening the sense of place and passenger experience.

As part of the alliance, they propose to carry out exhibition projects of the country image that, based on cultural and artistic expressions genuinely representative of the Dominican community, generate identification processes. This is how they propose to make temporary exhibitions at airports with archaeological, ethnographic and visual arts pieces in general.

Likewise, they will be convening activities with Dominican artists to work creatively around the themes or concepts related to the action of traveling and its components or related objects, such as the suitcase and the plane as pieces of art and exhibitions with attractive themes of the dominicanity.

The agreement, signed at the Centro León in Santiago by the president of the Eduardo León Jimenes Foundation, María Amalia León; the executive manager of the León Center, María Luisa Asilis and the CEO of AERODOM, Mónika Infante Henríquez, also contemplates the offer of quality artisan and creative products with the Centro León seal related to the exhibitions they carry out in the airport stores or in spaces specially designed for it.

”Following the model of several airports in our group, such as Lyon in France or Kansai in Japan – whose terminals have hosted representative exhibitions of the history and art of the host country – we are excited to sign this alliance together with the León Center, with which We will be holding exhibitions at our airports that allow us to reveal our national identity through visual art, while making the experience of travelers more pleasant,” said Mónika Infante Henríquez, CEO of AERODOM.

”At the Centro León we have assumed two great premises in the last year: art does not stop and culture is hope. Therefore, this agreement with AERODOM provides us with spaces to develop these calls to action and at the same time fulfill our institutional mission of promoting creativity, respect for identities and improving habitability through education, promotion and the dissemination of culture”, commented María Amalia León, president of the Eduardo León Jimenes Foundation.

The proposed initiatives are part of the customer service approach and the commitment to improve the passenger experience at the airports belonging to the VINCI Airports network, operated by AERODOM, located in Santo Domingo, Puerto Plata, Barahona and Samaná.

Thanks to the agreement, AERODOM joins other airports in the VINCI Airports network that have also opened their doors to promote local cultural expressions, such as the Lyon airport in France that collaborated with the 15th edition of the Biennial of Contemporary Art and the Kansai Airport in Japan that showcased the work of eight renowned manga artists highlighting this japanese tradition.

The Centro León is a non-profit institution belonging to the Eduardo León Jimenes Foundation, which opened its doors to the public in 2003. It consolidates the trajectory and support for art and culture that the León family has been developing since the Foundation Eduardo León Jimenes. It collects 40 collections on visual arts, archeology, ethnography, Dominican folklore, Dominican popular culture, Dominican photography, bibliography, cartography, documentary and multimedia. Its programs and projects are articulated around its thematic axes: creativity, identity and habitability, through activities of socio-cultural animation and education. www.centroleon.org.do

Anterior 15.06.2021 Las Américas Int. Airport mobilizes more than 15 million pounds of cargo in May 2021, a record figure in its history